Growing demand and limited real estate has Chinese pork producers looking to the skies for expanded production. More “high-rise hog hotels” are going up on Yaji Mountain in southern China, as the country rapidly modernizes their hog industry. Farm Journal’s PORK reported construction on the first of the seven-story farrowing buildings this past summer, but continued expansion includes four more buildings in progress nearly double that size. One building will have as many as 13 floorsâ€”the world’s tallest building of its kind.

“There are big advantages to a high-rise building,” said Xu Jiajing, manager of Yangxiang’s mountain-top farm, according to Reuters. “It saves energy and resources. The land area is not that much but you can raise a lot of pigs.”

It might save on land, but building upwards means higher cost and complex feeding, ventilation and manure management issues. Moving pigs by elevator adds another level of complexity to animal handling. It also raises health concerns because of the multiple disease challenges in the country.

Farm manager Xu said Yangxiang reduces the risk of disease by managing each floor separately, with staff working on the same floor every day. New sows are introduced to a building on the top floor and are then moved by elevator to an assigned level where they remain.

The ventilation system is designed to prevent air from circulating between floors, instead coming from the ground channels to ducts on each floor. A central exhaust is on the roof with extraction fans pulling air through filters.

A waste treatment plant is still under construction to handle the site’s manure. After treatment, the liquid will be sprayed on the surrounding forest and solids sold to farms as organic fertilizer.

More Companies Building Up
Despite Chinese hog prices at an eight-year low, companies like Yangxiang are putting more money (30% more) into the multi-level buildings than single-story modern farms due to the densely populated, land-scarce areas.

Yangxiang will house 30,000 sows in this 11-hectare (27-acre) site by year-end, producing 840,000 piglets annually. The company has spent nearly 16,000 yuan ($2,524) per sow on the new farm, about 500 million yuan ($79 million), not including the cost of the pigs. Locating the farms on a mountain has challenges, but the site is close to Guigang, a city with a river port and waterway connections to the Pearl River Delta, one of the world’s most densely populated regions.

In Fujian province, Shenzhen Jinxinnong Technology Co Ltd also plans to invest 150 million yuan ($24 million) in two five-story sow farms in Nanping. Two other companies are building high-rise hog farms in Fujian as well, according to an equipment firm involved in the projects.

China’s 10 largest pig farming firms accounted for only 5.8% of hogs sent to slaughter in 2016, but that was up by 2.8 percentage points on the previous year, said Zhang Guangan, director of the China Swine Industry Association.

Record Set for October Cattle on Feed with 11.4 Million Head

Another monthly record was set for feedlot inventory after the fifth straight month of record high Cattle on Feed numbers... read more 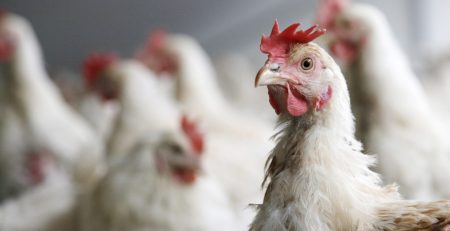 After several delays in the past year in setting an effective date for the final rule in organic livestock and... read more